Take an adventure to the African Savanna at our Africa Adventure Exhibit! Opened in the spring of 2016, this exhibit is the largest at Turtle Back Zoo. This exhibit is home to TBZ’s tallest residents, Masai giraffes!

Although they are the most populous of the subspecies, it is estimated there are fewer than 37,000 remaining in the wild, (recent reports of poaching would suggest it likely to be significantly less). Turtle Back Zoo is an accredited member of the Association of Zoos & Aquariums (AZA) and the giraffes are here as part of the AZA Species Survival Plan (SSP). SSPs are coordinated plans to manage the genetic diversity of animal species held in AZA zoos. In support of this plan, TBZ’s exhibit features a bachelor herd of four Masai males.

*Due to weather, the Giraffe will be off exhibit most of the winter season. In the meantime, catch a Behind-the-Scenes tour of our Giraffe Barn! Learn more at https://turtlebackzoo.com/discover/behind-scenes-tours/

The African Adventure exhibit was constructed to make the animals feel perfectly at home. It features three acres of land designed to mimic the African savanna, a climate-controlled barn with special flooring, giraffe-height windows and adjustable hay racks. It also has multiple viewing areas so everyone can get a good look at all the exhibit has to offer! While the giraffes are the stars of this area, don’t miss the other animals from the savanna, including, eland, tortoises, ostriches, and smaller bird species.

In 2017, our Lion and Hyena exhibits opened. 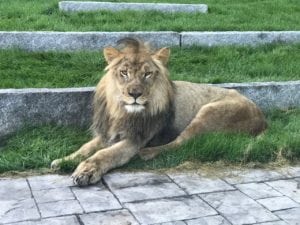 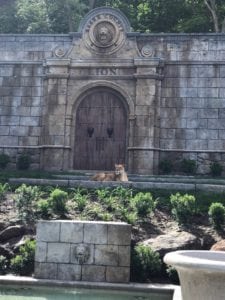 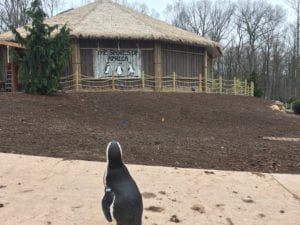 Open year-round; some animals off exhibit in winter or inclement weather